The Saturday Review for July 19, 1969, featured as its cover story, "Ivan Illich: The Christian as Rebel". The author: Peter Schrag, who quoted Illich as saying that the problem "is not the American way of life lived by a handful of millions . . . but rather the growing awareness that those who live the American way will not tire before the superiority of their quasi-religious persuasion will be accepted by the underdogs." 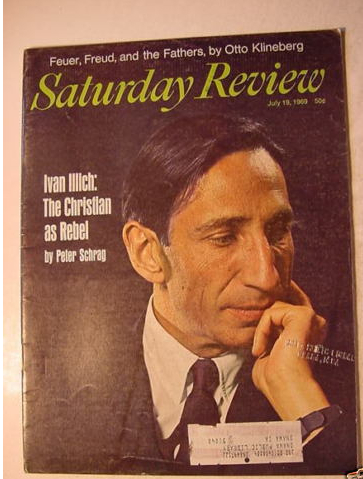 In today's Sacramento Bee, Mr. Schrag contributes a column arguing that Gov. Jerry Brown is better suited to running California right now than he was back in the 1970s:

At times during those years, [Brown's] talk about an era of limits and the need to lower expectations seemed just a little – well, preachy. Similarly "small is beautiful," the British economist E.F. Schumacher's metaphor for the design of human-scale appropriate technologies that Brown embraced, often seemed almost un-American at a time when "bigger is better" was the rallying cry of national progress.

But limits – whether economic, environmental, political or military – hardly seem so strange now, even if the state, and other states and the nation as a whole, didn't face the monster budgetary crises they now struggle with.

Mr. Schrag, who is the retired editorial page editor at The Bee, goes on to mention Brown's friendship with Illich:

But there's one other major area – beyond the nation's slowly growing awareness of limits – that suits Brown more to this time than to last time around, and that's his deep distrust of large bureaucratic institutions, something he confirmed again in a conversation shortly after his inauguration Monday.

Brown, who like many of his contemporaries once had at least one hesitant foot in the counterculture of the 1960s, was deeply influenced by the anti-institutional ideas of his friend Ivan Illich. Illich, ordained as a priest, later an influential scholar, challenged all conventional ideas of progress – in institutionalized schooling, in modern health care, in technology – as forces that alienated the individual from his own ability to live a confident, self-reliant life.

In his moving tribute after Illich's death in 2002, Brown talked about how Illich took him back to the "Ignatian indifference to secular values of long life, fame and riches," he had learned as a Jesuit seminarian.

Both in his life and his work, Brown said, Illich "bore witness to the destructive power of modern institutions that 'create needs faster than they can create satisfaction, and in the process of trying to meet the needs they generate, they consume the earth.' "

Living in California as we do, we are glad to have Gov. Brown running things. Whether or not he'll be able to draw much from Illich is to be seen. The state's budget is a mess, and as a result so are its schools, for instance. (The previous governor called for all textbooks to be replaced by online courseware.) Californian technology companies are scrambling to develop solar panel technologies and other alternative sources of energy, and the state's environmental laws are some of the most rigorous around. And some remnants of the '70s counterculture still remain. But there won't be any easy way of downscaling things. If nothing else, this state was built up on and around the use of automobiles.

In any case, as we've noted here earlier, it's quite clear to us that Brown is quite sincere in his understanding and appreciation of Illich. The two men were genuinely friends.