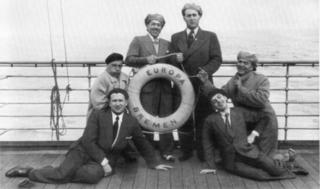 Here, in case you don't recognize them, are the Comedian Harmonists, one of the musical marvels of the 20th Century. They're on their way, here, I believe, to New York, where they will be received as near-superstars. I post this image because I happen to be their world's No. 1 biggest fan.


These six men formed an a capella singing group in 1927, in Berlin, and for the next 7 years, they took Germany, the Continent, and the United States by storm. They were Big - almost Beatles big, a true sensation, turning out dozens of 78-rpm disks and performing in all of the biggest halls and appearing in more than a dozen feature films. To this day, their music is widely listened to in Germany and, increasingly, elsewhere.


Modeled on a U.S. group called The Revellers, the Comedian Harmonists sang in close, jazz-inflected harmony and used incredibly rich and inventive arrangements. They sang jazz and pop and classical music - including, even, a 5-minute rendition of the complete overture to The Barber of Seville. They were renowned for being able to mimic all sorts of musical instruments solely with their voices - trumpets, strings, even entire horn sections - and they showed great wit and style: They usually appeared on stage in tuxedos ... 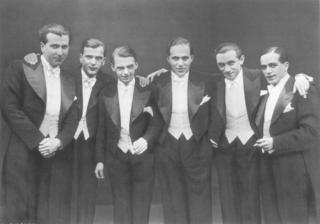 ... yet their songs might be about such silliness as owning a pet cactus or having an uncle in Karumba who danced the rhumba.


One of the six, Erwin Bootz, played piano - a true accompanist, he added just the right amount of foundation and melodic filligree and never intruded on the vocals. The others sang precisely-arranged parts:


Formed and achieving great stardom during the Weimar Republic, the Comedian Harmonists represent a distillation of much that was great in Germany at that time - a European sophistication and urbanity and playfullness and above all, supreme musicality. But like so many German artists of that era, they eventually fell afoul of the Nazis and those gangsters' systematic racism. Three of the Harmonists' members happened to be Jewish, a fact that in Nazi leaders' eyes created a serious contradiction: How could Jews be such superstars, so popular with the German volk - and with international audiences, too? Under increasing pressure, the three Jews in the group left Germany in 1934 and suddenly, the Comedian Harmonists were kaput. Though the two halves of the original group - one left behind in Germany, the other landing first in Austria - each hooked up with new singers, neither remnant could recreate the magic.


Fortunately, a great deal of their splendid music was captured on disk and is available in a variety of CD editions. My advice: Run, don't walk. This is truly great music, the human voice at its best. There is a movie to watch, too, made in Germany in 1999 - The Harmonists - which retells the group's story in a somewhat fictionalized narrative. It's widely available here in the U.S.


It is moving, I think, to recall how different a world it was when music like this - so sophisticated, musically and lyrically - was some of the most widely-heard and appreciated pop music of the day. Likewise, of course, all of the swing that was on the radio, in dancehalls, and in jukeboxes here in America during the '30s and '40s. The Mills Brothers, a jazzy, classy, close-harmony singing group popular in the U.S., then, were clearly inspired by the Comedian Harmonists.


There are websites to visit, too, of course: One very informative and extensive collection of information, biographies, lyrics, and even MP3s is available, in English and German, right here.
Posted by Winslow at 1:18 AM No comments: