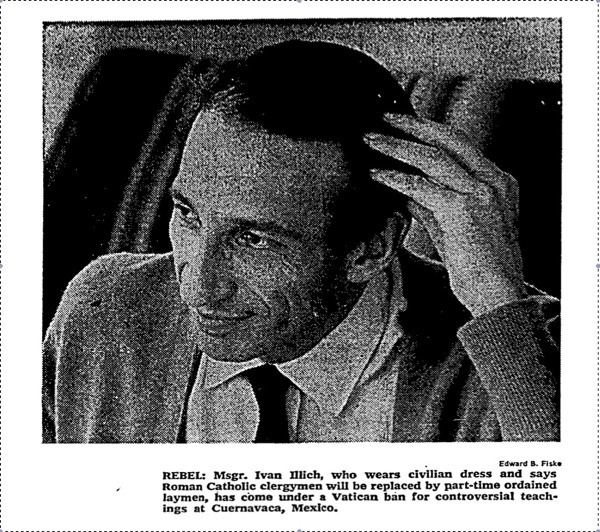 This photograph appeared in the New York Times for Feb. 2, 1969, accompanying the paper's regular "Religion" column. The author was Edward B. Fiske, who also made this photo, and the headline was "Illich Goes His Own Way." The article reported the rift that had occurred between Illich and the Vatican.

Posted by Winslow at 2:09 PM No comments:

In 1972, Mother Earth News Magazine published an interview with Hartmut von Hentig, a German critic of education born in 1925. The interview took place in Cuernavaca, where von Hentig was attending a seminar - "Education for a Global Community of Man" - at CIDOC.

Illich acknowledged von Hentig in Tools for Conviviality and von Hentig wrote the foreword to the German edition of Deschooling Society. Judging by this interview in Mother Earth News, he was not entirely in agreement with Illich about what to do about education and schooling. While Illich argued for radical alternatives to compulsory schooling, von Hentig says the best approach is to work within the system and reform it. He wrote two books about his arguments with Illich over schooling and its reform: In 1971, Cuernavaca oder Alternativen zur Schule?, and two years later, Die Wiederherstellung der Politik - Cuernavaca revisited.

Evidently, this interview is one of the few pieces written in English about von Hentig that's available online. In German, there is a 1974 piece from Der Spiegel that discusses him in relation to Illich.

Some later photos of von Hentig are shown here.
Posted by Winslow at 7:00 PM No comments:

Here, for the sake of completeness, is a 1973 book by Illich, En América Latina, para qué sirve la escuela, as scanned by and available, in part, at Google libros. We mention it not because we can read its Spanish text - we cannot - but because its cover shows a photo of Illich that we've not seen before.
Posted by Winslow at 5:37 PM No comments:

A 2003 paper in memory of Illich, written by Carl Mitcham, has appeared online, for the first time at no cost to read. Originally published in an MIT journal called Design Issues, the paper officially costs $12 to view.

Evidently, this PDF's text is not searchable, but the paper is certainly worth a look by anyone interested in Illich - and especially in his thoughts on technology, "tools," and the growing influence of experts who seek to design urban spaces and the things people use in their daily lives. Ironically, we've noticed, many design professionals toss around the term "conviviality" seemingly without much knowledge of what Illich originally meant by it. For example, there are many proposals to weave into urban space all sorts of information technologies - more screens, that is, and schemes for "ubiquitous computing" that involve networks of hidden sensors and wireless access points.

Mitcham writes that while at Penn State in the early 1990s, he and Illich started to investigate the "historical archaeology of design." A paper with the working title of "Anti-Design: Notes for a Manifesto on Modern and Postmodern Artifice" was partially completed, its first paragraph reading, at one point:

Contra the widely promoted belief that design is something all human beings do and have done throughout history, but now must do more consciously and thoroughly than ever before, design is something that has had a history. Its beginnings can be traced to the rise of modernity, and it will almost certainly come to an end with the modern project. Indeed, we have an obligation not so much to promote designing as to learn to live without it, to resist its seductions, and to turn away from its pervasive and corrupting influence.

Mitcham and Illich planned to argue that 1) architects and industrial engineers rarely achieve their stated goals of expanding control and reducing unintended consequences, and even if they do so, 2) "experts and professionals ultimately would dehumanize the world." The project's aim, Mitcham recalls, was "to reanimate the moral criticism of designing as a lack of proportionality in ambition and contrivance."

We imagine that much of the thinking Illich brought to this aborted project would have resonated with his earlier thoughts on "research by people," as opposed to "research for people," a topic he wrote about at some length in the book Shadow Work. We also can see him criticizing the design industry as largely a make-work project, much as he viewed compulsory schooling as, in part, simply an employment program for intellectuals. We're pretty sure, too, that he would have been highly critical of the many designers who bestow the "Third World" with their latest gadgets and gizmos. Their stated goal, which strikes many as just a new, albeit thinly-disguised imperialism: "to change the world." In many cases, it appears to us that young, fresh-out-of-school designers use their work in impoverished areas to win publicity for themselves, boost their credibility, and beef up their portfolios, all with the aim of eventually winning big-bucks mainstream projects.

"Too often," Mitcham writes, "design treats the world as an enemy rather than a friend, and calls in experts to manipulate and manage."

Posted by Winslow at 4:51 PM No comments:

Anyone familiar with the life of Ivan Illich knows that he spent much of his time in Cuernavaca, a small city located about 50 miles south of Mexico City. Situated at an elevation of about 5,000 feet, Cuernavaca has a pleasant climate and long has been a summer residence for Mexico's elite as well as a popular destination for tourists.

Indeed, it was in an old hotel in Cuernavaca that in 1961, Illich founded CIDOC, a school that sought to train missionaries from North America - to "de-Yankee-fy" them, as Illich put it - before they served elsewhere in Latin America. After CIDOC was shut down in 1976, Illich maintained a home in a village called Ocotepec, just north of Cuernavaca. (We've seen this home described as a simple adobe, which makes sense, but we've not seen any photo of it.)

In a terrible way, Cuernavaca and Illich's presence there have been in the news, lately. Javier Sicilia, a well-known Mexican poet who lives there, has emerged in recent weeks as the leader of a grass-roots movement that's protesting the escalating but seemingly fruitless "war on drugs" that has killed some 40,000 Mexicans in the past 4 years. Among these was, on March 28, Javier's own son, Juan Francisco Sicilia, age 24, who with six other young men was murdered in Cuernavaca. While some of the victims showed signs of torture, no link between them and the drug trade has been established; they were murdered in cold blood.

Sicilia quickly turned his grief into action, speaking out, addressing the Mexican government, and calling for mass protests by Mexicans of all classes. In early May, he led thousands of people in walking silently from Cuernavaca to Mexico City, where they called on President Felipe Calderon to stop the violence and reconsider the current drug war strategy.

In many recent profiles of Javier Sicilia, Illich is cited as one of his major influences and a good friend. As described in this comprehensive report in The Narco News Bulletin by a reporter on the scene in Cuernavaca, Sicilia in 1994 founded a magazine called Ixtus. He used it to develop "his critique of modern society based on the Christian Gospels and the spirituality of personalities like Gandhi, Ivan Illich and Guiseppe Lanza del Vasto, the 'apostle of nonviolence.'" The latter, originally Sicilian, was a disciple of Gandhi who went on to found four ashram-like communities, called Arks, located in France. The Mexican poet visited one of these and with others tried to found a similar community in Mexico. It did not materialize, but it was in the late-stage planning meetings for this Mexican Ark, it's reported, that Sicilia met Jean Robert, a longtime collaborator and friend of Illich's who also lives in Cuernavaca.

And it was Robert's writing in Ixtus that introduced the poet to Illich's thought, and later, he introduced the two: “One day I brought Javier to Ivan’s house and they got along very well. They began an immediate and profound friendship and saw each other until Illich’s dying day,” Robert told Narco News's reporter Al Giordano. According to the Narco News article, Javier went on to translate Illich’s texts into Spanish and, with Valentina Borremans, CIDOC's co-founder and manager and now, the executor of Illich’s literary estate, to edit a two-volume compilation titled Obras Reunidas, or Reunited Works.

In 2009, Sicilia founded a new magazine, called Conspiratio - a name that clearly echoes Illich's call for the cultivation of conspiracy. Reaching far back in Church history, Illich sought to resurrect the notion of conspiratio, describing it as "a commingling of breaths," as the creation of a special "atmosphere" that emerges when committed friends come together, if only around a dinner table lit by candles, to share thoughts, to contemplate, and to seek the truth.

A quick search of the Web finds several relevant items, all written in Spanish - which, we regret to say, we can neither read nor speak. Here, for instance, is a piece from May 30, 2011, called "Ivan Illich y Javier Sicilia – Por Jean Robert." In 2008, a publication called Letras Libres published an article about the new collection of Illich's work, here. The same website offers another article about Illich, posted in March, 2001, by Sicilia and Robert. And yet another piece apparently concerning Illich and the poet, by Robert, is available at a site called SurySur: "La historicidad de las instituciones: sobre Ivan Illich y Javier Sicilia."

Finally, we point readers to a short video clip that our search discovered on YouTube. With narration in Spanish, "La tumba de Iván Illich" shows what appears to be a grave for Ivan Illich in Ocotepec. "¿Ocotepec o Bremen? un misterio que resolver," reads the video's caption - "a mystery to resolve." Ourselves, we believe he's buried in Bremen, beneath a simple wooden cross in the crowded graveyard of a Protestant church in the outlying district of Oberneulander. We've visited this grave, though not, alas, in the warmer months when, we've been told, it bursts with sunflowers.

Posted by Winslow at 3:50 PM No comments: