David Cayley 's Latest: "The Myth of the Secular"

Canadian Broadcasting has just made David Cayley's latest series of programs, "The Myth of the Secular," available for downloading as MP3 podcasts. There are five parts, each one about 54 minutes long. They are available here, off the Web, or via iTunes. Or, the shows may be listened to on the Web, starting here.

Western social theory once insisted that modernization meant secularization and secularization meant the withering away of religion. But religion hasn't withered away, and this has forced a rethinking of the whole idea of the secular. IDEAS producer David Cayley talks to Craig Calhoun, Director of the London School of Economics, and Rajeev Barghava of India's Centre for the Study of Developing Societies.

The secular is often defined as the absence of religion, but secular society is in many ways a product of religion. In conversation with IDEAS producer David Cayley British sociologist David Martin explores the many ways in which modern secular society continues to draw on the repertoire of themes and images found in the Bible.

Early in the post-colonial era, politics in most Muslim countries were framed in secular and nationalist terms. During the last thirty years, the Islamic revival has dramatically changed this picture. Anthropologist Saba Mahmood talks with IDEAS producer David Cayley about her book, The Politics of Piety.

The Fundamentals was a series of books, published by the Bible Institute of Los Angeles between 1910 and 1915, which tried to set the basics of Christianity in stone. Fundamentalism now refers to any back-to-basics movement. Malise Ruthven's Fundamentalism asks what all these movements have in common, in this feature interview with David Cayley.

"All significant concepts of the modern theory of the state are secularized theological concepts." So wrote German legal theorist Carl Schmitt in a book called Political Theology. American legal theorist Paul Kahn has just published Political Theology: Four New Chapters in which he argues that the foundations of the American state remain theological. He explores this theme with IDEAS producer David Cayley.

Also available from CBC in podcast form is Cayley's five-part program, "The Scapegoat: René Girard's Anthropology of Violence and Religion." It is an excellent introduction to Girard's thinking:

Human beings, according to French thinker René Girard, are fundamentally imitative creatures. We copy each other's desires and are in perpetual conflict with one another over the objects of our desire. In early human communities, this conflict created a permanent threat of violence and forced our ancestors to find a way to unify themselves. They chose a victim, a scapegoat, an evil one against whom the community could unite. Biblical religion, according to Girard, has attempted to overcome this historic plight. From the unjust murder of Abel by his brother Cain to the crucifixion of Christ, the Bible reveals the innocence of the victim. It is on this revelation that modern society unquietly rests. Girard's ideas have influenced social scientists over his long career as a writer and teacher.

Ivan Illich mentions Girard at some length in his notes at the back of Shadow Work, and in the book The Challenges of Ivan Illich, Jean-Pierre Dupuy attempts to find some common ground between the two men, both of whom Dupuy has worked with closely. We'd be curious to know what, if anything, Illich and Girard thought of each other's thinking and analysis of history and Christianity.

One hint: Gene Burkart wrote this in an email last January: "I remember Ivan once saying […], in an off hand remark, that Girard had made the concept of sacrifice hopelessly confusing for people."

Posted by Winslow at 3:42 PM No comments:

More celebrations of Illich, in Austria and Italy

Among those participating will be Barbara Duden, Marianne Gronemeyer, and Martina Kaller, Illich's biographer.
Posted by Winslow at 1:33 PM No comments:

Recalling a visit to CIDOC

Now a design consultant, writer and educator, Rodney Clough visited CIDOC in 1971, to attend a seminar on "interpersonal relational networks," organized by cybernetician Heinz von Foerster. (We wrote about this CIDOC event early last year.) At a website serving as a Festschrift for the Austrian von Foerster, Clough remembers his visit, which had its moments:

I did not know Heinz, nor did I know the other seminar participants, save one, Gordon Pask, a "cybernetician," whom I had heard lecture in New York two months earlier. I can blame June 21 [the day he arrived at CIDOC] on cybernetics, for it was cybernetics that lured me, caught me and beached me on the Mexican plateau.

I was listening to my other Cuernavaca host, Ivan Illich, with whom I had corresponded briefly and who suggested I attend this seminar.

"You printed the wrong day in the catalog," I countered, pointing to the catalog, which read, "Interpersonal Relational Networks, June 22." Ivan Illich shrugged me off and launched an "annoying-and-at-the-same-time-charming" non sequitur, "We have something for everybody."

Clough ranks as the first person we've ever seen use the word effulgent.

Posted by Winslow at 8:55 PM No comments:

We were pleased, this morning, to discover from the Blogger dashboard that New Scare City's total page view count has crossed the 15,000 mark. The bulk of our visitors are from the US, followed by Canadians, Britons, and those from Germany, France, and Italy.
Posted by Winslow at 5:24 PM No comments:

Ivan Illich died in December, 2002, and now, 10 years on, a number of get-togethers are being planned here and there to celebrate his life and work. 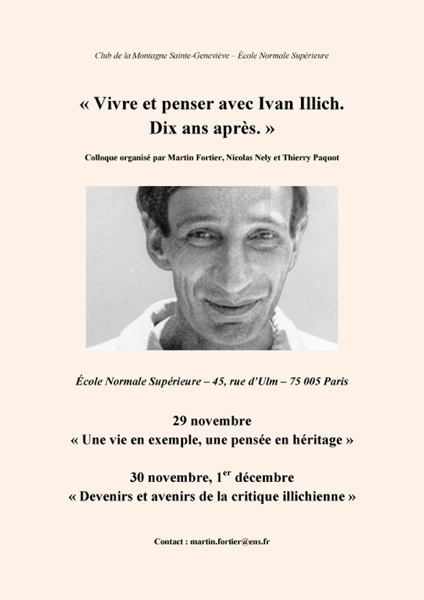 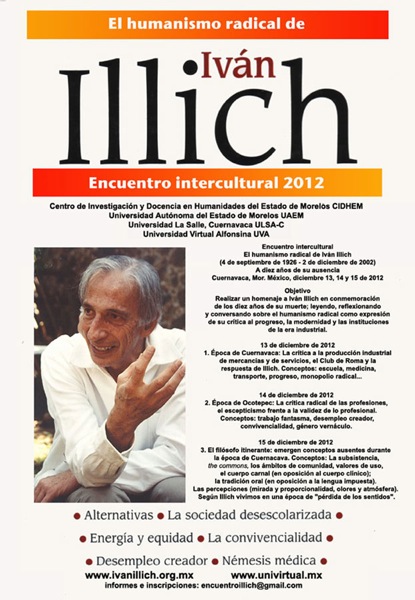 And in Croatia, at the University of Rijeke - details are tentative, but probably Dec. 6, according to Iva Rincic (irincic [at] medri [dot] hr), Assistant Professor, Department of Social Sciences and Medical Humanities.

Finally, as we wrote earlier, there will a symposium in Bremen in early December, and here are the details. (The title translates roughly as "Jester in Absurdistan?") 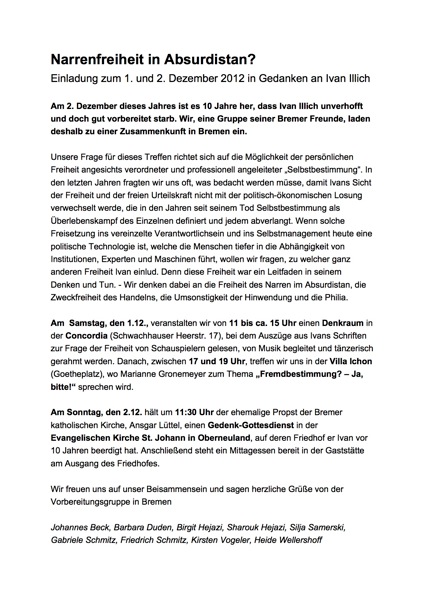 Posted by Winslow at 2:04 AM No comments:

We've just learned of some newly-published papers about Ivan Illich. We've not had a chance to read them, but we look forward to doing so. Until then, here's what we know:

Now, that school's law review has published a set of papers presented at the conference, as follows. All of these are available in PDF format for downloading at no charge:

“FOR TOMORROW WILL WORRY ABOUT ITSELF": IVAN ILLICH’S DESCHOOLING SOCIETY AND THE REDISCOVERY OF HOPE
Jared Gibbs

EXCHANGE AS A CORNERSTONE OF FAMILIES
Martha M. Ertman

FROM WISCONSIN TO EGYPT AND BACK AGAIN: A COMMENT ON BRIDGETTE BALDWIN’S ANALYSIS OF THE SHADOW WORK THESIS
Davarian L. Baldwin

Meanwhile, a journal published by Wiley called Educational Theory has published this paper: "Ivan Illich's Late Critique of Deschooling Society: 'I Was Largely Barking Up the Wrong Tree'," by Rosa Bruno-Jofré and Jon Igelmo Zaldívar. The Wiley abstract states:

In this article, Rosa Bruno-Jofré and Jon Igelmo Zaldívar examine Ivan Illich's own critique of Deschooling Society, and his subsequent revised critique of educational institutions and understanding of education, within the context of both his personal intellectual journey and the general epistemological shift that started to take shape in the early 1980s. Bruno-Jofré and Zaldívar consider how, over time, Illich refocused his quest on examining the roots (origin) of modern certitudes (such as those related to education) and explored how human beings are integrated into the systems generated by those “certainties.” Illich engaged himself in historical analysis rather than providing responses to specific contemporary problems, while maintaining an interest in the relation between the present and the past. Under the metaphors of the word, the page, and the screen, he identified three great mutations in Western social imaginaries and the reconstruction of the individual self. Bruno-Jofré and Zaldívar argue that while his written work, including Deschooling Society, generally had an apophatic character, his critique of education, particularly in the late 1980s and 1990s, is intertwined with his analysis of the parable of the Good Samaritan and his belief that modernity is an outcome of corrupted Christianity.

Posted by Winslow at 9:46 PM No comments: