From 1961 to 1976, some of the most fruitful and enduringly influential discussions about modern, technological, industrial society took place in a resort town located up in the mountains south of Mexico City. There, in Cuernavaca, Ivan Illich ran the Center for Intercultural Documentation, or CIDOC, as a sort of anti-university that set out to rigorously question and disrupt the major economic development efforts that the U.S. government and the Catholic Church were focusing on Latin America. Running an intensive Spanish language school to fund its activities, CIDOC conducted wide-ranging research seminars and published pamphlets and other documents that involved leading intellectuals in fields such as theology, economics, philosophy, and politics. Many of these people went on to write important books and play important roles in on-going discussions and research. By all accounts, CIDOC seems to have been an exciting place, and not solely due its central figure, Illich.

We recently came across an attempt to map CIDOC's main participants and show their various connections, all using a technique called social network analysis. By analyzing a selected portion of the nearly-complete collection of CIDOC publications located at the University of Vienna, Elisabeth Lemmerer has produced an intriguing document (PDF) that identifies the people who seem to have worked closest to and interacted most with Illich during the CIDOC years. There may not be any major surprises, here, but Ms. Lemmerer's work would likely be interesting to anyone familiar with CIDOC and/or Illich. Her text is rich in biographical detail, as well. And, surprisingly for a student in Vienna, it's written in English.

She includes this graph, which shows the main players in CIDOC's intellectual activity. That large circle in the middle is Illich, surrounded by many names that will be familiar: 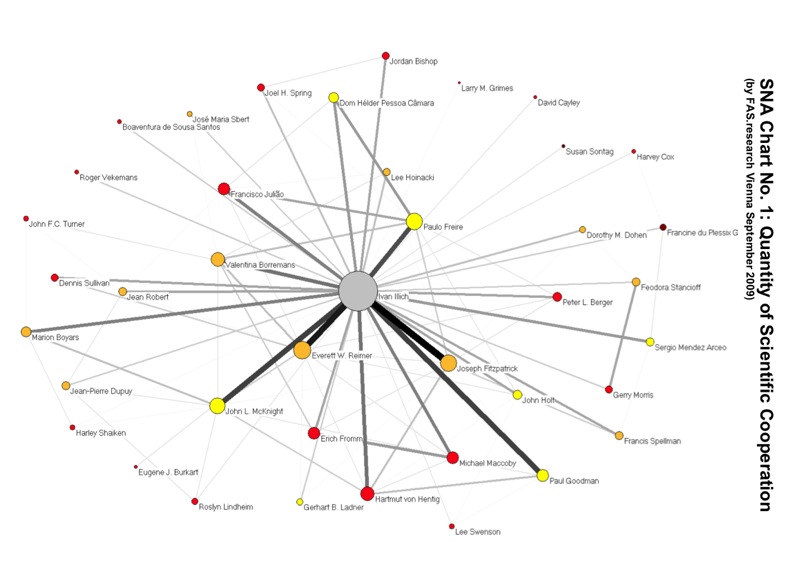 Ms. Lemmerer explains this chart as displaying "the strength of scientific cooperation among network actors. I determined this strength by considering the number of references obtained during my literature search which mention collaboration between two actors. The thicker the line between two dots, the more references, and, consequently, a greater amount of scientific cooperation was established. The weaker the tie, the less detectable cooperation occurred. If there is no tie at all, there was no relation detectable at all."

The document, titled "Examining a Sample of the American-Mexican Scientific Cooperation in the 1960s: A Social Network Analysis of the CIDOC-Network," is Ms. Lemmerer's thesis for her Magistra der Philosophie degree - much the same as a masters degree, we're told. The professor guiding her research was Dr. Martina Kaller-Dietrich, who in 2008 published a biography of Illich (in German, and the only book-length Illich bio we're aware of): Ivan Illich (1926-2002), Sein Leben, sein Denken.

Why analyze Illich's social network? "With the closing of CIDOC’s doors in 1976," Ms. Lemmerer notes,

Illich was deprived of his living. He no longer had constant incomes to rely on. Already in 1968 he had resigned from priesthood, hence, the practice of priestly ministry was no longer an option. After he tramped the roads of Southeast Asia, he made use of something which Illich himself might have termed differently: his social network. As CIDOC’s long-time director, Illich had collaborated with scholars from numerous well-known educational institutions in the US. He now intentionally made use of these acquaintances as they facilitated access to visiting professorships and short-term teaching positions at universities across the US. From the late 1970s onwards, Pennsylvania State University, Fordham University in New York, and the University of California, Berkeley, all played large roles in Illich’s professional and institutional relations in the US. Throughout the remainder of his life, he was an itinerant scholar.

What about Edgar Z. Friedenberg who gave a seminar at CIDOC in early 1971 along with Holt, Goodman, and others in Alternatives in Education? Was there any communication with Illich?

Friedenberg is not a familiar name, but Googling around reveals that he was (is?) a noted critic of schools, someone who often gets cited in the company of Illich and Paul Goodman. If he indeed was at CIDOC, chances are he was in communication with Illich. We'll keep our eye out for more information.

In 1973, it seems, he reviewed Deschooling Society in a Harvard law journal, as noted at HEINONLINE.