Shamelessly, we re-publish this charming photo of Illich, evidently made in 1974 by Gisèle Freund. We found it - using Microsoft's Bing image search service - at a good-looking Mexican site, all in Spanish, called Letras Libres. 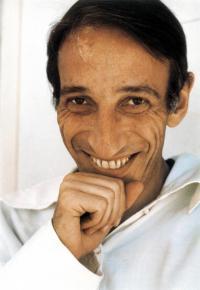 (Gisèle Freund, we're pleased to discover, was a German photographer, of socialist bent - born 1908, died 2000. Among other notable episodes, she shot in England for Life magazine during the Depression, shot many top writers and artists in Paris, was a stringer for the Magnum agency, was hounded by the FBI, and in 1981, ended up as François Mitterand's official photographer. We look forward to learning more about her.)
Posted by Winslow at 3:11 PM