"The classroom on demand"

Even before the actual publication of his book Deschooling Society, Ivan Illich was growing concerned about the educational system's having set out to create a "global classroom." With traditional schooling itself being severely questioned, not only by Illich but by many other critics and activists, the educational system was branching out, working to find other venues and channels with which to create demand for and deliver its services. This was reflected in the rise of terminology such as life-long learning, adult education, and on-the-job training.

Here is a blurb from the website of LearnCapital, "a venture capital firm focused exclusively on funding entrepreneurs with a vision for better and smarter learning":

The future is shaped by the way we teach and learn in the present. We’re in the middle of one of the great revolutions in the history of education. New technology platforms, applications, and services are not only amplifying and augmenting classroom learning, but creating a world in which any Internet-enabled device can become a classroom on demand. (emphasis ours)

What, we wonder, would Illich have made of that idea, the "classroom on demand"? Or of Bridge International Academies, a company funded by LearnCapital that operates "a network of ultra-low cost private primary schools dedicated to making high quality education affordable in the developing world"?
Posted by Winslow at 12:04 PM No comments:

David Levine, the late, great caricaturist for The New York Review of Books, drew Ivan Illich twice, once in 1975, to illustrate a review of Medical Nemesis, and again in 1983, to accompany a review of Gender. The Review is now selling both illustrations - printed and framed to archival standards - for $150 per copy. The images, printed at 7-1/2" x 10-1/2", are these: 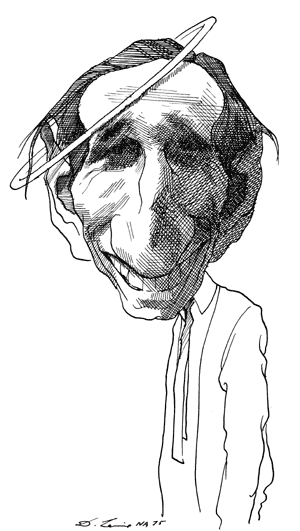 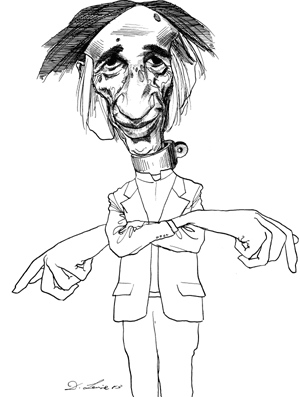 This second image is based on the photo of Illich used on Gender's dust jacket.

In fact, Keith Thomas, the reviewer of Gender, makes the Tolstoy connection explicitly. His opening paragraph:

Ivan Illich is the leading contemporary exponent of the romantic anarchist tradition. Like Rousseau, Godwin, or Tolstoy, he inveighs against the coarseness of modern materialism, deplores economic growth, and preaches a return to simplicity and authenticity. As a Catholic priest in the 1950s, he strongly opposed the papacy’s plan to export American-trained missionaries to Latin America. As vice-rector of the Catholic University of Puerto Rico from 1956 to 1960, he resisted the extension of compulsory schooling to the third world. At Cuernavaca in Mexico in 1962 he founded the Center for Intercultural Documentation, an institution designed to achieve the “de-Yankification” of Latin America. During the last twelve years or so he has issued a relentless series of little books designed to expose what he sees as the most insidious features of contemporary society. Currently, he is teaching medieval history in Germany, an activity more closely related to his political objectives than might at first be apparent.

As far as we know, Thomas' review was the most thorough of those that Illich's controversial and oft-dismissed book received upon being published, at least in English. As Lee Hoinacki later pointed out, part of the book's importance lies in its exploring the kind of complementarity - man and woman, different from but providing definition to each other - that Illich thought about a good deal in later years. If nothing else, Gender's rich set of footnotes are a feast of ideas, an almost breathless report from the frontlines of Illich's research and thinking, as David Cayley puts it in his introduction to The Rivers North of the Future.
Posted by Winslow at 2:37 AM No comments:

Some early papers on education

Without a doubt, Illich is best known as the author of Deschooling Society, a book published in 1970 that spurred a great deal of discussion and activism. Deschooling did not, however, spring forth from Illich's mind overnight. That book was the result of much thinking and discussion that started during Illich's tenure in the late 1950s on a board overseeing the education system in Puerto Rico. What's more, Deschooling was not his last word on the subject of schooling, either. He was refining his thinking on the matter even as his soon-to-be-notorious book was still in press.

We mention this only to set the scene for a recent online discovery we've made, namely of some early papers by Illich on education. Unfortunately, we don't know where these papers were published, but they appear to have shown up as reprints in a magazine of some sort. We've found a scan of the relevant pages (PDF) at the website of Prof. Dr. Martina Kaller-Dietrich, a professor at the University of Vienna and author of a biography of Illich.

The papers are as follows:

• "The redistribution of educational tasks between schools and other organs of society," delivered at a conference held in 1967 in Puerto Rico.

• "Schooling: the Ritual of Progress," which is the third chapter of Deschooling. Previous to the book's publication, this paper had appeared in the New York Review of Books.

• "Ivan Illich in Australia, Questions and Answers," which is the transcript of Illich's interaction with an audience in Melbourne, at a conference held in 1972. This piece, new to us, provides a wonderful sampling of Illich's remarkable wit and intellect.

Finally, this PDF document includes a piece by another author, W. Senteza Kajubi, who asks, "Is the school an obsolete institution?" Mr. Kajubi is a Ugandan who presented this paper in 1970, at something called the World Conference on Education.

Posted by Winslow at 7:33 PM No comments: