We've just found a passenger list for the steamship that brought Ivan Illich to America in 1951. On Oct. 27, in Bremerhaven, Germany, the newly-ordained priest got on board a former troop ship named USNS General Harry Taylor. It arrived in New York harbor on Nov. 6, evidently carrying many refugees and displaced persons.

Here is a portion of the passenger list showing a "John Illich" from Austria: 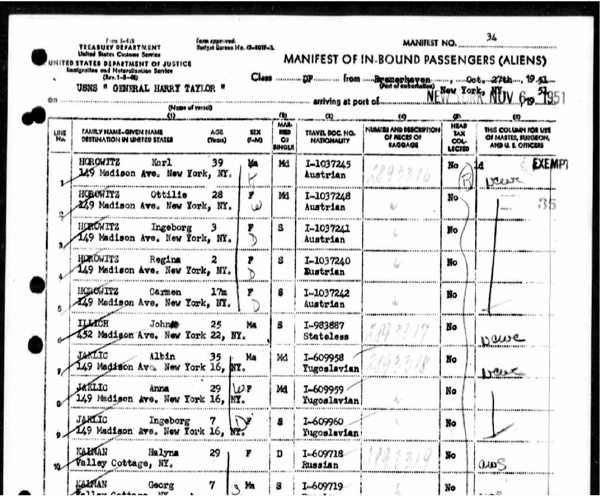 (We have to wonder if Illich stopped in Bremen on his way to Bremerhaven. Bremen, a few miles inland from the harbor, up the River Weser, was the home of his childhood drawing teacher. In the speech he gave in 1998 upon receiving the Culture and Peace Prize of Bremen, Illich remembered her:

I first heard of Bremen when I was six, in the stories told me by my drawing teacher, who came from one of your patrician families, and in Vienna was homesick for the North. I adopted the tiny, black-dressed lady as Mamma Pfeiffer-Kulenkampf. One summer, she came along with us to Dalmatia, to paint. Her watercolors still grace my brother's study. From her I learned how to mix different pigments for the contrasting atmospheres of a Mediterranean and an Atlantic shore.

Later in life, of course, Illich taught and lived in Bremen for much of the year, and he died there in December, 2002.)

Illich has listed his destination as 452 Madison Ave. in New York. This is the Cardinal's Residence, situated directly behind St. Patrick's Cathedral. We'd be surprised if Illich actually stayed there; it is a small building and he was a fairly junior person in the church hierarchy. In fact, he told interviewers such as David Cayley that upon arriving in New York, he stayed with friends of his family on the Upper East Side (or such is our memory.) And it was in speaking with a maid there, an African-American woman, that he learned of the Puerto Rican barrio in East Harlem. After visiting that place, he said, he decided not to proceed to Princeton University, where he had planned to study the history of medieval alchemy, but to work instead as a parish priest in Washington Heights, on the far upper west side of Manhattan.

USNS General Harry Taylor was built in 1943 for use as a transport ship. She served in the Pacific and then, after the war, helped to bring soldiers back from Europe. Here is a watercolor painting of the ship: 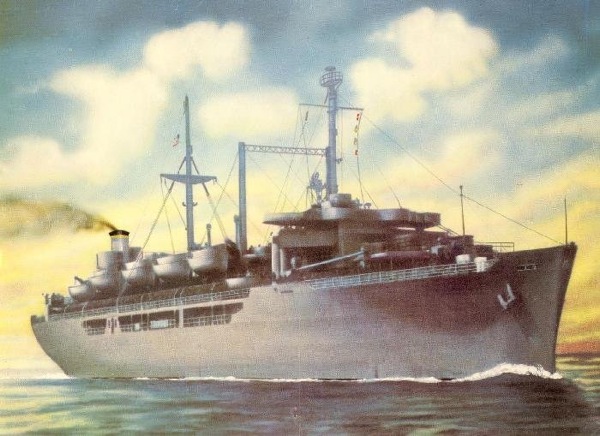 And below is the ship birthed in Staten Island, NY. It later was equipped with specialized radar instruments to help with the testing of ballistic missiles. In 2009, the ship was sunk in Key West Harbor to serve as the second-largest artificial reef in the world. 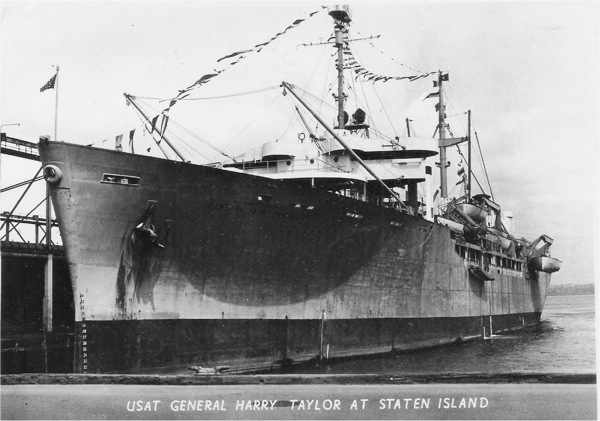 I know this is an older blog post, but I would like to get the full passenger manifest as my parents were on *this* voyage too (Oct 27 thru Nov 6, 1951). Any help would be appreciated ( email ).