While browsing eBay for a car stereo recently, we saw for sale a book we'd not been aware of: When Schools are Gone, A projection of the thought of Ivan Illich, written by an Australian named Michael Malkin and published in 1976. A seller in Australia is offering the book for AU $15.90, or about $17 U.S. Over at Amazon in the U.S., four used copies are selling for prices that range from $29 to $103. 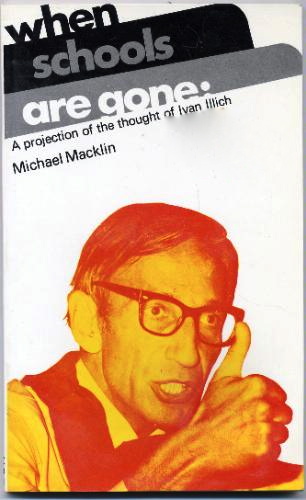 Google Books lists this title as one that it has scanned, but it enables only limited searching of the text.

We couldn't resist seeing what else we might find out about Malkin and his book. Not much, as it turned out, but the book's title did bring us to another quite interesting item that also is new to us. It's a paper, "Revisiting the critiques of Ivan Illich’s Deschooling Society, by Jon Igelmo Zaldívar, at the Universidad Complutense de Madrid. (This institution, Wikipedia reveals, is one of the oldest in the world, its origins dating to 1293.) In 2010, Mr. Zaldívar published a paper in The International Journal of Illich Studies, about Illich's conflict with the Vatican.

Mr. Zaldívar's Deschooling paper, published last year in the International Journal for Cross-Disciplinary Subjects in Education looks at the "articles, book reviews, books, and unpublished theses written by scholars from the United States, Germany, Canada, Australia, Great Britain, Russia, Argentina, and France, which offer various reactions to Deschooling Society." After briefly reviewing Illich's early life and the founding of CIDOC, the paper looks at the publishing history of the essays that make up Deschooling. It then goes on to look at how the book was received, citing numerous reviews and reactions. The author finds "a clear division in all these approaches to Illich’s thought … those who were against schools and those who defended educational institutions."

One of the more intriguing items cited in this article is a dissertation presented in 1973 by William Ideson Johnson at Ohio State University. The dissertation is available in PDF format here. As Mr. Zaldívar describes it:

On this research, the author had the support of John Ohlinger [sic], an expert on Illich’s works and his intellectual experience. Ideson [as Zaldívar refers to Johnson, consistently] developed an interesting approach to the influence of alchemy in Amos Comenius, one of the most important figures of modern pedagogy. The goal of this project was to focus on the influence of alchemy in shaping the modern concept of education. Of particular interest on this research is that Ideson [sic] understood how Illich’s thought had changed throughout his career, as seen in different texts written before and after Deschooling Society.

(The proper spelling is Ohliger. Likewise, the Zaldívar paper gets the name Dana L. Stuchul wrong in the main text, though not in its bibliography.)

He doesn't mention it in Deschooling, but Illich would explain later that he saw a strong parallel between faith in the educational process as a way of deliberately transforming and "developing" the raw, unformed human being into something better and the alchemist's attempts to transmute base elements into gold.

Not mentioned by Mr. Zaldívar are a few items that strike us as relevant to any look at the reception and after-effects of Deschooling. One is a 1976 book (or pamphlet, as Illich would have called its 63 pages), Imprisoned in the Global Classroom, that he wrote with Etienne Verne. It consists of two essays, one by each man. (Verne can be seen on YouTube discussing "la vitesse - propos du Ivan Illich," en français.) 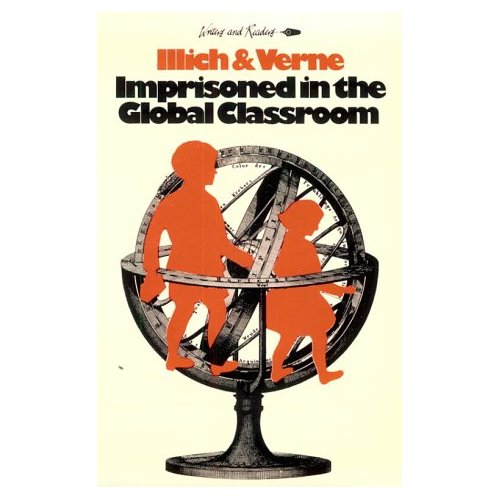 The other is Illich's 1988 paper, "The Educational Enterprise in the Light of the Gospel," which is available as part of David Tinapple's extensive Illich archive. Here, Illich is concerned largely with power. He compares teachers working in the Chicago ghetto to Oskar Schindler working against heavy odds to save his Jewish workers from the Nazis. (In 1988, the Schindler story was known mainly through a somewhat obscure book that Illich summarizes for his audience; the movie Schindler's List was still years in the future.) Illich also discusses Robert Jay Lifton's study of Nazi doctors and of the clownish, anarchistic ways of Jesus. In fact, this paper is one of the most explicitly religious essays of Illich's that we've seen, citing chapter and verse and discussing the Gospel in detail. This may put off some people in education circles, but it does hint at some of the most important thinking of Illich's, thinking that informs all of his work, even if only tacitly.

Anyone interested in learning more about Illich's post-Deschooling thoughts on education would do well to look at Ivan Illich in Conversation and The Rivers North of the Future, both based on interviews conducted by David Cayley. In both, Illich provides useful insights into the thinking that led to the Deschooling essays and how he came to realize that he'd missed some important developments in that book. And, they might also look for a transcript or recording of his 1986 address to the American Educational Research Association's General Assembly, discussed by Ms. Stuchul here. There, Illich pleaded for more research into the history of compulsory schooling and talked about Orwell's analysis of human language getting turned into coded "communications." And more.