Holt's 'Escape from Childhood,' back in print

A book called Escape from Childhood, The Needs and Rights of Children, written by the late John Holt, has been republished for the first time in 20 years. Controversial but well-received when originally published in 1974, the book argues that children should have all the rights that adults enjoy: the right to vote, work for wages, travel, choose their own guardians, learn what they want when they want, and more. Holt, who was close to Ivan Illich and who is seen as a major figure in the home-schooling/unschooling movement, also explores the fairly recent social construction of the very category "child."

The book has been re-published by HoltGWS, in Medford, Mass. It's available in paperback ($8.99) and in electronic format ($2.99) from Amazon.com; wholesalers may order from CreateSpace.com (One book merchant selling through Amazon is asking precisely $491.42 for a pristine first edition of this book in hardback.) 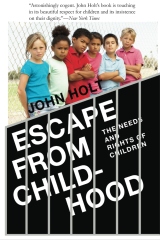 "This is my favorite book of the many Holt has written. It does not cover any aspects of learning/educational issues as do his other books. Instead it addresses the matter of looking at children as whole individuals who should be treated respectably, as any adult would want to be.

"Our culture too readily encourages parents, and adults in general, to use their voice in a excessively authorative manner which only serves to bully and demean children. No one would want to be spoken to or treated in such a condensending manner. This book will open your eyes to the damage we are doing to our beloved kids when we accept the cultural standard way of parenting. Highly recommended!"

Like Holt, Illich drew on the work of Phillipe Aries (1914-1984), a medievalist and historian of the family and childhood. In the book Ivan Illich in Conversation, David Cayley draws Illich out on Aries:

CAYLEY: In your book, Gender, you say that you could not have written either that book or Deschooling Society without the work of Philippe Aries.

ILLICH: It is through Aries that I was introduced to the historicity of the notion of "the child," and that in this sense it is a modern construct. I probably fell for Aries because I had always disliked it when the children of my friends would take the attitude "I'm a child and you must pay attention to me." Since I was fifteen, I had refused to notice or to enter into any kind of intercourse with such a person. Some of my friends, better friends, family friends, have considered me all my life a brute. But an interesting thing has happened a number of times. When these kids had difficulties with their parents, they suddenly appeared on my doorstep - at age fourteen or fifteen. In two cases, they came to another continent, seeking refuge. My intuition is that one of the most evil things our modern society does is produce children in this specifically modern sense. As a young man, I decided that I wouldn't do that. That was the reason I decided at age twelve not to marry.

CAYLEY: To stay with childhood for a moment - does identifying it as a specifically modern idea invalidate it? Is it not also in some sense an advance?

ILLICH: It's just that with all advances, the greater they are, the more they are an extreme form of privilege. We are sitting here and having this conversation together because I was, at one glance, so impressed by the feeling between you and your children, whom you have kept out of school. Now for them, the fact that you have abandoned the idea of childhood in order to take these kids who live in a world of childhood fully seriously as kids is an extraordinary advantage. But this is not a model. This is something to be emulated, not imitated. It's the spark of uniqueness that must be cherished.