An Italian Take on Illich

An Italian website offers in PDF an article about Illich and, as indicated in its headline, the idea that shaped his thought for many years, corruptio optimi pessima - the corruption of the best is the worst. The best way to understand the West as we know it, Illich concluded, is as a perverse, even demonic version of the Gospel.

The article is one that appeared in a magazine called Meditteraneo. Alas, we cannot read the piece, but we're happy to report that it does include a photo of Illich that we've not seen before. 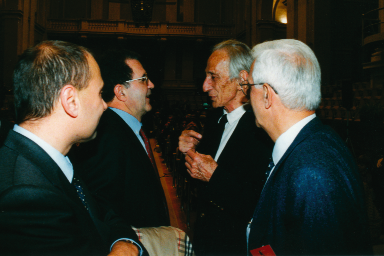 From the left, this shows Sindaco Vitali, Romano Prodi, Illich, and Paolo Prodi. Romano Prodi has served twice as prime minister of Italy - from 1996 to 1998, and from 2006 to 2008. His brother Paolo is an historian whom Illich credits (In The Rivers North of the Future, p. 80) as an important "teacher."

Illich tells David Cayley: "With Paolo I had, for the first time, an opportunity of reflecting, with a man several years younger than I, on the way in which the Western, Roman Church attempted to give a juridical shape to the household rules by which monastic communities lived together. This attempt to create a canonical establishment … produced a deep corruption. It led … to a toning down of the message of the founder…."

Illich is introducing the topic of the "criminalization of sin." Illich goes on to explain that while the Library of Congress' online catalog lists eighty-two items by Prodi, only one is available in English.

"I bow to this authority and feel pretty certain that he is right, and I say this having read his critics and satisfied myself that I am not allowing friendship to outshine my critical intelligence. But I would hardly dare to say what I'm about to say, if he were looking over my shoulder, because I will take liberties which are neither academically legitimate, nor necessarily kind. I'm sure, if he reads it later, he will bear with me."

Among other topics, llich's discussion of the criminalization of sin delves into the history of oath-taking and contracts, which Prodi has spent much effort looking into. Oaths, Illich notes, were proscribed in the New Testament - "nothing [was] more absolutely forbidden." And that was a radical change from the way people had generally acted up until then - a "rule-breaking innovations," as Illich calls it, that the Church ended up perverting in its effort to turn Christ's call to "love thy neighbor" into a law.

A year ago, a symposium was held in honor of Illich - A New Beginning, it was called. The opening talk was given by Paolo Prodi. A program for this meeting can be seen here and here. And here, we believe, is one of the papers delivered there, about Illich in Mexico. And Facebook shows a page about this event, as well.
Posted by Winslow at 1:27 AM