In the early 1980s, Ivan Illich accepted an invitation to join a group of thinkers to discuss various topics: "ideas," education, the city, street life, architecture, the economy, and more. This was the Dallas Institute of Humanities and Culture, formed in 1980 and still going strong.

This photo, undated, shows people gathered at the Institute; that's Illich, sixth from the left in the back: 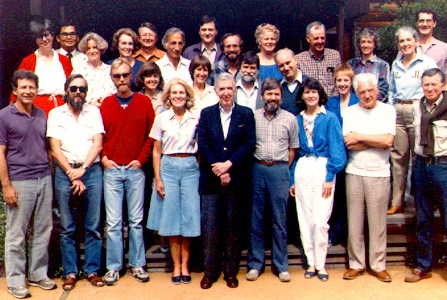 For Illich, one result of this activity was the writing of a short but unusually poetic and wide-ranging book called H2O and the Waters of Forgetfulness, which the Institute originally published in 1985. The following year, the Institute published an eclectic, 250-page collection of pieces by its members and guests that had appeared in its newsletter, a book called Stirrings of Culture. (The book is still for sale at the Institute's website and, for less money, via Amazon.com.) In addition to Illich, contributors included African-American novelist and essayist Albert Murray, Jungian psychologist James Hillman, city theorist William H. Whyte, architects Robert Venturi and Vincent Scully, and poet-farmer-philosopher Wendell Berry. 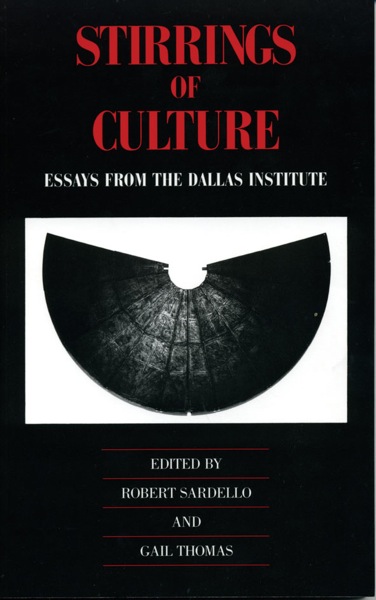 We're pleased to share, here, in full, one of the pieces by Illich that appears in this book. (The other two of his are concerned with water and with "Health as Disease." There's also a piece by Barbara Duden, "Women's Illnesses in the 18th Century.") It appears to be the partial transcript of a talk he gave, offering further thoughts about the historicity of city space as first explored in H2O. (We recall reaching for this essay when the youngster in our household brought lice home from grammar school - an increasingly common occurrence, it seems; for a moment, anyway, we enjoyed the spark of suddenly feeling connected to history.)

Hair and the History of the City

When I was a young man, the world was still very much full of bed bugs and lice and fleas. Only well after DDT, bugs became a word for mechanical foul-ups. Lice and fleas and bugs were the regular visitors on the human body. In reading the encounters between doctors and patients in the past, it is clear that people were quite used to living with a festering sore. The doctor couldn’t do anything about it, and it is not that people didn’t mind - they simply didn’t go to the doctor to stop that festering. That is just what the human condition was. But it's always difficult to speak with people about the fact that a festering sore, for example, was something you were stuck with and you had it. That was a pretty common statement until about 1908. Until that time, a patient had about one chance in two that the doctor could do something, anything at all, about the condition which they brought to the doctor. And, certainly in most of the world, it was quite obvious and normal to scratch and itch.

Until recently, human beings never lived with their own surface out of contact with animal life. They shared their skin with other animals.

As a historian, I find it very often difficult to explain to a younger generation what was taken for obvious - what could not be changed, what the human condition was like only a couple of generations ago. DDT is interesting because it extended down into the most underdeveloped countries. The poorest people are rich enough in the world now to get effective flea powder.

Living with an uninhabited skin makes us much less aware of our body surface, aware of what hair is - this fuzzy fuzz which we still carry with us, which has always been an extremely important symbol. … There is a very strange gulf between ourselves and the way past people lived.

The gulf between past and present which makes it so hard for us to understand how people have lived, this gulf which makes us separated from ourselves, is a major reason we no longer have in the city a concept of “the commons.” We no longer have commons. Today we have private and public spaces. As far as I know, “private” and “public” are concepts which are simply not applicable to a traditional city. The difference between the opposition of private and public is as a sharp line. That line is like we today imagine our body covering, our skin, a line dividing inside and outside. Hair, inhabited hair, belonging at the same time to inside and outside, makes the division more “fuzzy,” makes our life and animal life more alike; and when there is a commons, our life and the lives of others are experienced in common; life in the city, a gathering around a commons. …

A precise line does not separate me from the rest of the world. Transitions are much more imprecise. In the past, people carried an aura which surrounded them, an aura that had to be washed away, deodorized, to accommodate people in the kind of cities we live in today. … Only sometime after washing became possible, lice and flea killing became effective, and therefore we became even more possessive individuals. Fur became then a symbol for luxury, but not any more for the duplicity of inside and outside which the fur implies. In the fourteenth century, it became so important for a person who had an important aura to carry a fur that trained - for kings and nobles. This royal coat became so large - 140 to 200 square feet, weighing about fifty pounds - that one needed assistants to move around. The royal person wanted to shine in the aura which covered him all around. It is a projection of an animal inside - both an expression of the animal as well as an expression of shame of my fur as it is and therefore have to cover it with clothes. …

I thought as a contribution to this discussion about growth and undergrowth I want to point out that the undergrowth of cities is a place where people are aware that the surface of the city, just like the surface of their bodies, is constantly shared for many purposes. A commons is not a public space. A commons is a space which is established by custom. It cannot be regulated by law. The law would never be able to give sufficient details to regulate a commons. A typical tree on the commons of a village has by custom very different uses for different people. The widows may take the dry branches for burning. The children may collect the twigs, and the pastor gets the flowers when it flowers, and the nuts from it are assigned to the village poor, and the shadow may be for the shepherds who come through, except on Sundays, when the Council is held in the shadow of the tree.

The concept of the commons is not that of a resource; a commons comes from a totally different way of being in the world where it is not production which counts, but bodily, physical use according to rules that are established by custom, which never recognizes equality of all subjects because different people follow different customs. Their differences can be recognized in the way they share the commons. …

Once we really have the experience of uninhabited skin, it is enormously difficult for people to understand that commons in the city are typical, are characteristic of the perception of space in past time, and not the distinction between private and public space.

Thanks so much for posting this essay. I found it via David Bollier's site and through my work and study of commons.