We've mentioned Gustavo Esteva, a Mexican activist and friend of Ivan Illich, in a previous post, here. Recently, we came across an article by him and streaming video of him speaking about the same topic at a conference.

The article is entitled, "The Meaning of the Global Crisis and 'Recovery' for Study Abroad: What Are We Preparing Students For?" Esteva presented it in 2010 at a conference called "Fostering Multicultural Competence and Global Justice," put on by an organization called SIT, in Vermont. (SIT was founded as the School for International Training, but has gone by the acronym since 2007.) The essay is available in PDF on this page (click Download on the right) and so are two video streams (at the very bottom of the page, labeled Keynote Speech Parts 1 and 2).

A description of the piece:

There is universal consensus that we are at the end of an historical cycle. But the consensus vanishes when you try to identify the corpse: we cannot accept that it is not just another business cycle, as the pundits still proclaim, but neither can we assume the end of globalization, neoliberalism, capitalism or the modern era, as many critics currently argue. Raised with a promise of infinite prosperity, beyond business cycles, at 'the end of history' after the marriage of capitalism and liberal democracy, our students have suddenly entered an era of decreasing expectations and increasing uncertainty. How to reformulate their hope, any hope? How can they be inspired by what the people are doing, all over the world, when they take again in their hands their own lives and destinies, reclaiming their own definition of the good life?

Esteva is identified as founder of the Universidad de la Tierra, a learning center (?) in Oxaca. More about that organization is available here, among other sites. Here is a photo of a sign seen there: 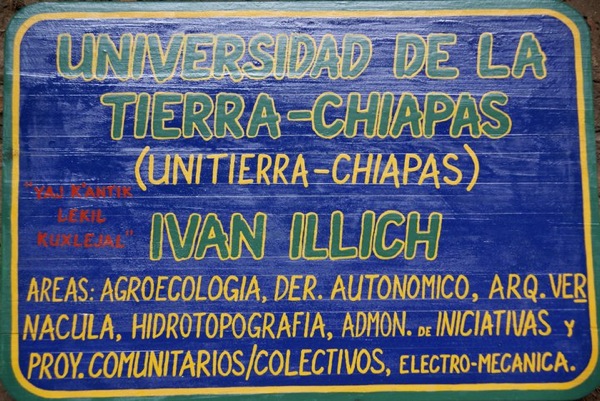