A Web page devoted to Mother Jerome, Ivan Illich's friend and collaborator, can be viewed here. She was born Melanie “Muska” von Nagel in 1908, in Germany. She entered the Benedictine Abbey of Regina Laudis, in Hartford, Connecticut in 1958, and died there in 2006. According to this biographical page, which is part of the Abbey's own website, she had quite a life. And the Abbey itself looks to be a lively place. 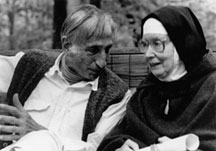 Illich wrote his paper, "The Scopic Past and the Ethics of the Gaze" (available at the Pudel site in Bremen), he states, "after discussions with Barbara Duden, Mother Jerome, O.S.B., and Lee Hoinacki." Matthias Rieger, a collaborator and friend in Bremen, talks at some length about Mother Jerome in his paper, "The disembodiment of the utterance" (also available from the Pudel site). We've always assumed that Illich's 1989 paper, "Posthumous Longevity, An open letter to a cloistered community of Benedictine nuns" (also at Pudel), was addressed to Mother Jerome. "Dear Mother Prioress," it opens. But we may be wrong about that. (Can anyone help?)

Under the name Muska Nagel, she translated the works of Paul Celan, who was possibly Illich's favorite poet.