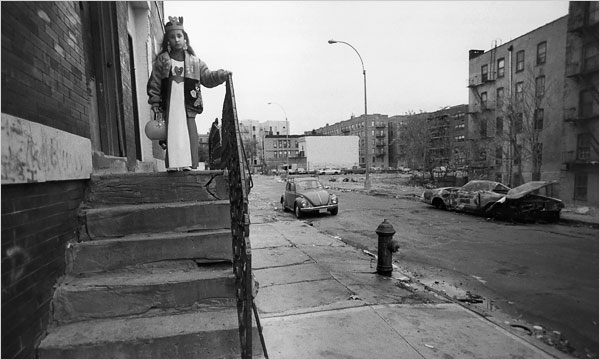 Halloween, South Bronx, 1991, photo by Angel Franco of The New York Times. The trick-or-treater is Guissette Muniz, then age 6.


I remember seeing this photo when it first appeared in the paper back in '91, and from then on, if I wasn't already, I made a point of keeping my eye out for Mr. Franco's work. Today, the Times has a story about Ms. Muniz and her family, about the moment that this photo captures and where life has taken each of the family's members since then.
'"I consider myself a princess,” [Ms. Muniz] admitted. ...“That’s what I am. I think highly of myself. I don’t want to toot my own horn, but I think I’m a great girl, and I deserve the best in life. I’m not cocky, but you have to have confidence.”'

Part of what makes this photo work, I think, is its tilt - Angel's angle? - which underlines the idea that not all is OK in this landscape and corner of the city. Indeed, the South Bronx had been ravaged by arson and crack and years of neglect. Off-kilter, indeed.

As I recall, this image originally was published as one of a series by Mr. Franco. It's unfortunate, I think, that the Times' archive does not contain many of the photos that appeared in the paper - for reasons of copyright, no doubt. But they make up for this with the Lens blog, which is superb, a smart appreciation of photography, then and now. Which reminds me: Just the other day, for no apparent reason, my eye lingered for a long moment on a book on the shelf next to my desk - Photographs, by Roy DeCarava. I should look at that book again, I thought to myself, but I didn't. And then: Later that day, or the day after, I read on the Times' website - indeed, in the Lens blog itself - that Mr. DeCarava had just died, age 89. His photos are masterful in their use of light and shadow - an observation that may sound banal, but just look for yourself. There is a true painterly quality to his images. (I'd steal one to present here, but Lens is clever enough to protect its image sequences against such acts by presenting them in Adobe Flash. Lens presents 14 of his fotos, including a wonderful one of Duke Ellington in 1967, caught in an unguarded moment. And quite a few others of jazzers. More of his work is available at the most commendable Masters of Photography site.)
Posted by Winslow at 2:21 PM

Email ThisBlogThis!Share to TwitterShare to FacebookShare to Pinterest
Labels: Photography