One of the more intriguing organizations we've come across in our travels around the Web is La Scuola Popolare di Musica Ivan Illich, located in Bologna, Italy. Many musical performances filmed there, many of them featuring fairly free improvisations, can be found on YouTube. On the school's MySpace page, we find this description:

"Since 1992, the Ivan Illich Community School of Music (SPMII) in Bologna has proposed music courses for everybody: children, the youth and the elderly, those who wish to play and to sing together with others, those who have never touched a musical instrument, those who want to become professional musicians, those who want to improvise, those who want to make and listen to music untied by genres and those who want to have a good time learning. In addition to the individual instrument courses, the SPMII offers laboratories of ensemble music, practical workshops, classes for children as well as a choir and an orchestra. It has always paid particular attention to the music of oral tradition and to the music of improvisation and research. Weekly, the school presents lecture-concerts, open meetings of improvisation, films, debates and parties. SPMII and the park of Via Giuriolo 7 are places of musical and social interaction, a self-managed and libertarian space where people meet in a friendly environment. We are waiting for you…" 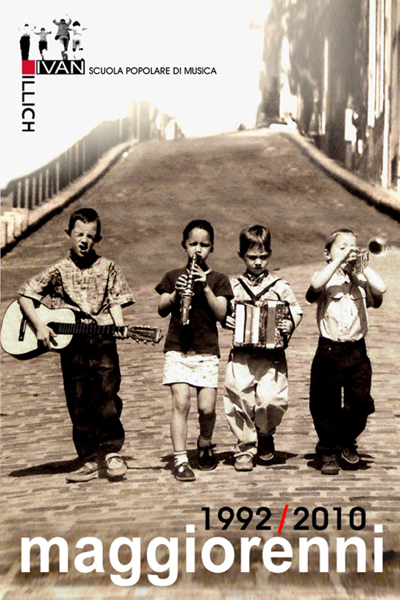 The school's main website is written in Italian, which we don't read, but look as we might, we can't find any text there that might be an explanation of how this school got its name. We can imagine, though, that Illich's notion of deschooling might have inspired musicians to found an alternative musical school, one aiming to teach anyone who wants to learn how to play music, and not necessarily using the traditional conservatory method or canon. As we've mentioned here, Illich's thoughts on education inspired composer Christopher Small to write a book in the 1970s called Music, Society, Education that in turn inspired people such as Peter Gabriel and David Byrne in their mining and developing the world music scene.

We can only guess at what Illich accomplished in Italy, France, and Germany - not to mention Spain and Mexico - whose languages he spoke fluently and where he was deeply respected. As might be expected, there is an Italian website devoted to him. There, we find a paper by Matthias Rieger, a Bremen friend and musician, entitled "Ascoltare la musica con le orecchie di Ivan Illich." Our computer Englishes this phrase as "To listen to music with the orecchie [ears] of Ivan Illich." (Somehow, we don't think Illich would have liked to see papers like this read in computer-translated form, so we'll refrain and give it our best guess.) The paper seems to have been presented by Mr. Rieger at the inauguration of something called the Centro di Documentazione Interculturale della Scuola per la Pace [Intercultural Documentation Center of the School for Peace?]. What appears to be a set of papers relating to Illich and presented at this forum in 2003 are available on the Web (PDF), in Italian. (A few days later: We've just noticed that some of these papers are available in English at the Pudel site, out of Bremen. There's even a poster for the conference in Bologna.)

Illich himself seems to have delivered at least one lecture in Italy that, as far as we can tell, has yet to appear in English. Barbara Duden refers to such a paper on page 16 of "Ivan Illich, Beyond Medical Nemesis (1976)," her 2003 overview and appreciation of Illich's work during the last two decades of his life. Evidently, Illich delivered a lecture at a Bologna symposium called “Sickness and Health as Social Metaphors." Ms. Duden writes that the paper was published in Le Monde Diplomatique for April 1999 and that an English translation was set "to appear in a collection of essays." Elsewhere, in a comprehensive bibliography of Illich's work, we've seen this citation:

Illich, Ivan (1998I): And do not lead us into diagnosis, but deliver us of the pursuit of health. Bologna, October 24th 1998, English Version of the Opening Lecture of the symposium on "Salute e Malattia". (The 'I' included with the date indicates that the item is written in Italian.)

And another bibliography states this:

Illich, Ivan (1998): "And do not lead us into diagnosis, but deliver us of the pursuit of health."

Bologna, October 24th 1998, English Version of the Opening Lecture of the symposium on 'Salute e Malattia'.

The Guardian's obit for Illich ends with this paragraph:

He was able to finish a history of pain which will be published in French next year, as will his complete works. His last wish, which was to die surrounded by close collaborators amid the beginnings of a new learning centre he had planned in Bologna, was not realised. (emphasis added)

We've read (in The Challenges of Ivan Illich) that Illich considered the Italian edition of Limits to Medicine: Medical Nemesis , as published in the 1990s, to be the definitive version of that text.

Meanwhile, we've always wondered what Illich's tastes in music were, if any.