We've just found another paper by Ivan Illich that, as far as we can tell, is not listed in any of the more-or-less official bibliographies of his work. From 1973, it's entitled "An expansion on the concept of alienation." The paper appeared in The Journal of Social Philosophy for January of that year (Vol. 4, Issue 1), which Wiley made available online in 2008.

We've not yet seen the paper in its entirety, but it starts off, at least, as a somewhat dismayed reaction by Illich to the reception of his book Deschooling Society. "As the hidden curriculum moves out of the darkness and into the twilight of our awareness, phrases such as the "deschooling of society" and the "disestablishment of schools" become instant slogans," he writes. "I do not think these phrases were used before last year. This year they have become, in some circles, the badge and criterion of the new orthodoxy. Recently I talked by amplified telephone to students in a seminar on deschooling at the Ohio State Ujniversity College of Education. ... "

More from the first page: "The [Marxist] concept of alienation cannot help us understand the present crisis unless it is applied not only to the purposeful and productive use of endeavor, but also to the use made of men as the recipients of professional treatments. ... Schools have alienated man from his learning. He does not enjoy going to school; if he is poor he does not get the reputed benefits; if he does all that is asked of him, he finds his security constantly threatened by more recent graduates; if he is sensitive, he feels deep conflicts between what is and what is supposed to be. He does not trust his own judgement and even if he resents the judgement of the educator, he is condemned to accept it and to believe himself that he cannot change reality. ... Today, it is relatively easy to get wide agreement on the fact that gratuitous, compulsory schooling is contrary to the political self-interest of an enlightened majority. ... Proponents of recorded, filmed and computerized instruction used to court the schoolmen as business prospects; now they are itching to do the job on their own. ...

Here is the facsimile of the opening page that Wiley makes available online: 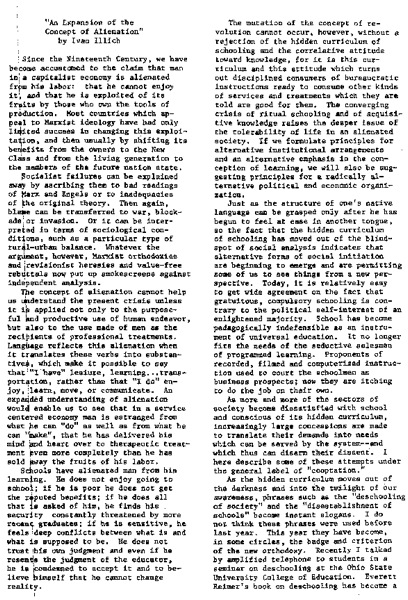