Somebody - but who? - has put online a complete scan of a smart, fascinating 1992 book called The Development Dictionary, ready for reading, searching and, for a fee, downloading in PDF or text format.

The book is available at Scribd, a site that enables the sharing of documents, including complete books, often without necessarily respecting the originals' copyrights. Whether or not Scribd is infringing on the copyright of this book, we cannot determine, but The Development Dictionary is there, for anyone to read or to copy. (see below)

We highly recommend this book to anyone interested in following the thought of Ivan Illich, who wrote one of its essays, titled "Needs." The book's editor is Wolfgang Sachs, an early student of Illich's. He was one of the people whom Illich credits for having informed him, while the book was being prepared for publication, that Deschooling Society had missed the fact that the educational system, under increasing attack in the early 1970s, had already begun to seek additional venues, beyond traditional schools, in which to sell its services. (See p.70, Ivan Illich in Conversation.) 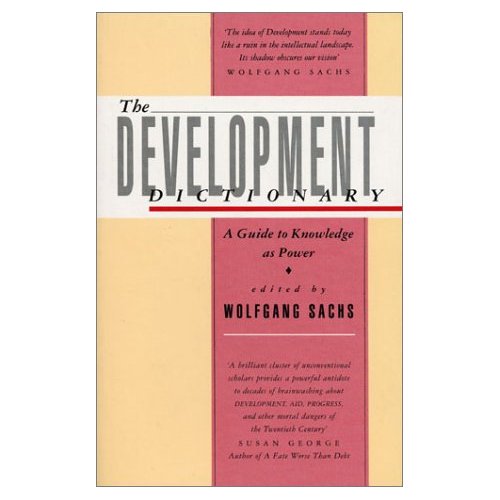 The Development Dictionary calls itself a "guide to knowledge as power," and offers itself as an obituary for the post-war era of Euro-centric socio-economic development. "Development," the book argues, is a "perception that models reality, a myth which comforts societies and a fantasy which unleashes passion."

… each chapter will dip into the archaeology of the key concept under examination and call attention to its ethnocentric and even violent nature. The chapters identify the shifting role each concept has played in the debate on development over the last 40 years. They demonstrate how each concept filters perception, highlighting certain aspects of reality while excluding others, and they show how this bias is rooted in particular civilizational attitudes adopted during the course of European history. Finally, each chapter attempts to open a window on to other, and different, ways of looking at the world and to get a glimpse of the riches and blessings which survive in non-Western cultures in spite of development. Each chapter will be of worth if, after reading it, experts and citizens alike have to blush, stutter or burst out laughing when they dare to mouth the old word.

Here is the table of contents, showing the book's wide range of inter-related topics. Many of the authors' names ought to be familiar to anyone acquainted with Illich and his work; all of them, Sachs writes, engaged in discussions together that eventually led to the creation of this book:

Illich's essay on "Needs" is available, in slightly different form, at the Pudel site in Bremen.

We must admit, we're not sure of the ethics of this book's being published, as it were, by Scribd - or, for that matter, of our mentioning it as we have. We're pleased to find the book online, if only as evidence of someone's interest in Illich, but is it proper to subvert the usual publishing process this way? Is it right for us to point it out and thereby encourage more people to grab a copy?

This scan of The Development Dictionary happens to be only one instance of the many complete copies of Illich's books that we've seen available on the Web. (And Google Books, of course, provides limited access to many more.) Some of these copies are facsimile scans whose text is not searchable, others are fully searchable in text and PDF formats. Illich himself, we understand from those who knew him, was not upset at seeing the text of books like Deschooling Society and Tools for Conviviality made available on the Net. But it does strike us as wrong to deny someone like Wolfgang Sachs - not to mention his publisher - any royalties that might come his way from legitimate sales of the book. On Amazon, the first edition sells for $35; a second edition, released in early 2010, is priced at $24 in paperback and $126 in hard cover.

We're happy to say that we bought this book years ago, when it was first published, and we've not downloaded a copy from Scribd. (We admit, we did try to download it, but we balked when asked to subscribe to the entire Scribd site for $9 a month or pay $5 for a 1-day pass. Another, no-charge option also was offered: In exchange for uploading a document of one's own - "give back to the community," the site urges - one can obtain the Sachs book and 24-hour download access to all of Scribd. That's something to consider, but it still doesn't put any money into Sachs' pocket.)

We urge anyone interested in Illich to buy the book in paper form, or find it in a library. Dense with insight and argument, it's one that anyone seriously interested in Illich's thought and its influence on others will want to read closely, as it was intended to be read - on paper, not screen. (No, Amazon doesn't sell it as an e-book.)