Anyone who has read or listened to Illich's last interviews with David Cayley will have encountered him discussing the conspiratio. This was one of two high points in early Christian celebrations, a sharing of the Holy Spirit through a mouth-to-mouth kiss. (The other was the comestio, a meal shared by all in attendance.) Conspiratio turns out to be a key element of Illich's intriguing explanation of modernity's origins.

This kiss signified "that each one of those present around the dining table contributed of his own spirit," Illich says, "or, if you want, the Holy Spirit, which was common to all, to create a spiritual community, a community of one spirit. … Slave and master, Jew and Greek, each contributed equally to making the community to which, through his contribution, he could then belong."

This ceremony, Illich goes on to say, "gave its participants the idea that community could come into existence outside of the community into which they were born, and in which they fulfilled their legal obligations -- a community in which all those who are present share equally in the act of its establishment."

By the high Middle Ages, however, this bodily contact and radical equality among all sorts of people was quite out of harmony with the "feudal ideal" of a strict social hierarchy, Illich states, and conspiratio's importance faded. Indeed, Illich explains, the bodily, mouth-to-mouth kiss was replaced by "an instrument … called an osculatorium, a kissing object. You can see it in museums, sometimes made of beautiful wood with precious stones. The priest would kiss it after kissing the altar and then hand it down to the community so that it could make its rounds through the church."

What does this osculatorium look like? We, for one, began to wonder. The Web provides a few images, though none seem to be as impressive as those Illich mentions. Here is one from Italy ca. 1550-1650, as explained by a page at James Madison University: 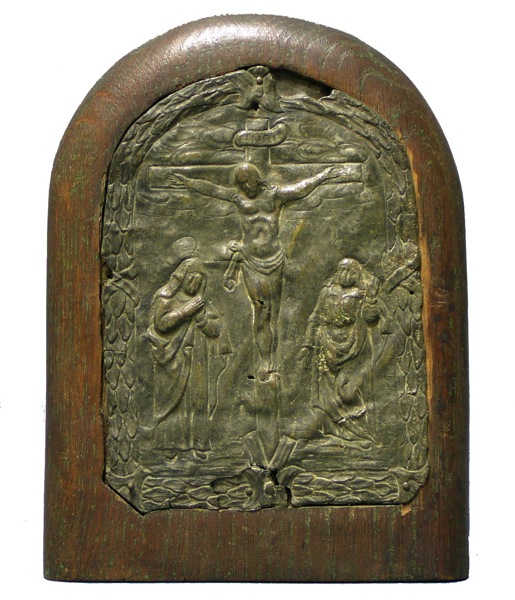 And here is another, from 18th-century Venice, as noted here: 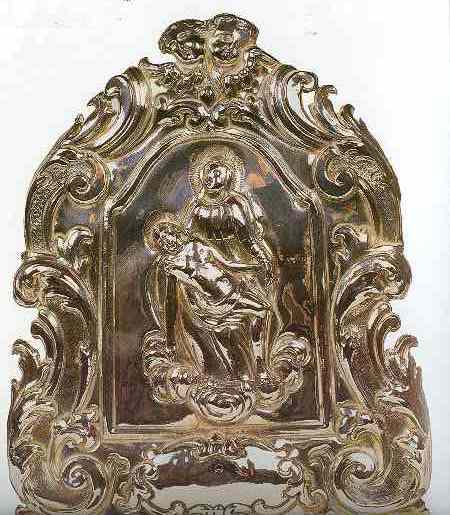 Illich delves into the notion of conspiratio in some depth in a talk given in 1998 when he was awarded the city-state of Bremen's Culture and Peace Prize. (The talk is available from the Pudel site as "The Cultivation of Conspiracy.") "Community in our European tradition," Illich says, "is not the outcome of an act of authoritative foundation, nor a gift from nature or its gods, nor the result of management, planning and design, but the consequence of a conspiracy, a deliberate, mutual, somatic and gratuitous gift to each other."

Indeed, Illich sees conspiratio as the source of today's social contract. "During the period of the Gregorian reform," he tells David Cayley, "the attempt to establish, legalize, and formalize the conspiratio reached a high point." The Church attempted to establish a "worldly solidity and clarity and definition and to create, through legal, contractual means, a social body entitled to recognition as an equal by the Emperor and the civil law."

"In order to understand the general idea of corruptio optima quae est pessima [the corruption of the best is the worst] as it applies to the political, it is necessary to observe throughout history this fading of the conspiratio, and the monumental elaboration of the conjuratio, or contractual arrangement."

Wikimedia Commons now has https://commons.wikimedia.org/wiki/Category:Pax_tablets with 13 already. Soon an article on Wikipedia, I hope.

Casey Farrell; Hebraist It may be also that the Irish name OSCAR is
ultimately derived from Latin's 'osculatorium' ...and 'Os' is a Runic letter-name.