A 96-minute video of a discussion about Illich held by some young Poles has been posted to Vimeo, here. We're unable to understand what's being said, but the focus appears to be on the book Deschooling Society, which recently became available in a new Polish translation. We read about that edition here:

A new Polish translation of Ivan Illich’s book Deschooling Society is released 34 years after the first edition. The book, discussed worldwide by progressive educators, artistic milieus demanding radical changes in culture and cultural education, is an excellent point of reference for the current Polish debate on the future of culture and social life. Deschooling Society was first published in Poland in 1976 in a then microscopic 3000 copies. The new translation features a slightly modified title and an introduction by Piotr Laskowski, Jan Sowa’s conversation with Zbigniew Libera, Hanna Kostyło’s text on the life of Illich, and drawings by Hubert Czerepok.

Instead of another reform of education, Illich postulates society without school, i.e. society that independently establishes educational networks: ephemeral, changeable, dynamic educational groups, somewhat of temporary autonomous spheres. Their creation depends on the needs that ever easier to satisfy in the era of the Internet – unrestricted access to educational resources, possibility of getting across to people who are willing to share desired abilities. But also a change in the structure of knowledge – from the pyramid, or taproot trunk into the rhizome. [Piotr Laskowski, from the introduction: Ivan Illich, Deschooling Society, Bęc Zmiana, 2010] 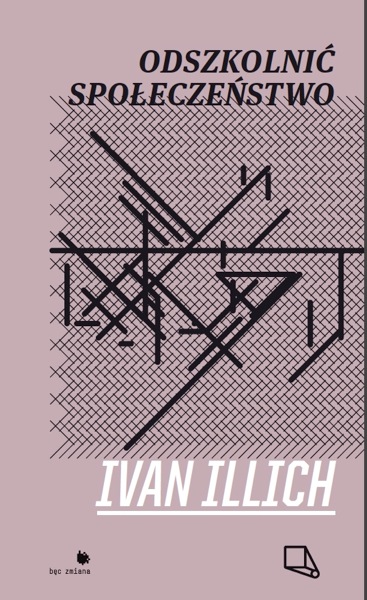 Ivan Illich (1926-2002) – Austrian thinker and critic of contemporary society, „humanist radical”, as Erich Fromm put it, one of the most original thinkers of the 20th century.

Przemysław Czapliński (b. 1962) – researcher in Polish culture, essayist, translator. Member of the jury of the Nike Literary Award, co-founder of the Department of Anthropology of Literature at AMU in Poznań, Ordinary Professor since 2002.

Piotr Laskowski (b. 1976) – Egyptologist, ideological historian, teacher. Co-founder and the first director of Jacek Kuroń Multicultural Humanist High School in Warsaw. Assistant Professor at the Jagiellonian university in Cracow. Published Sketches from the History of Anarchism [in Polish].

Janek Sowa (ur. 1976) – Doctor of Sociology, psychologist. Co-founder of Ha!Art Corporation Publishing House. Author and editor of books in psychology, sociology and social ciritque. Lectures at the Institute of Public affairs and Centre for Humanist Studies at the Jagiellonian University. Co-author of the initiative Goldex Poldex / www.goldexpoldex.pl